Having too much time on my

Having too much time on my hands …

A few months ago, there was a minor Internet Brouhaha over a video (hereafter referred to as the first video) which proports to show that

This was picked up by Phil Plait, the Bad Astronomer, and was followed up by a slightly more rigorous proof, https://www.youtube.com/watch?v=E-d9mgo8FGk ("the second video"), some backtracking/correcting, a Wikipedia entry, and a lot of web pages.

Not really, but kinda-sorta.

It is true that the sum

diverges, but we can approach the result (1) by several different lines of attack.

The standard method, which is referred to in the second video quoted above, starts with the Riemann Zeta Function:

This series only converges, as noted, when the real part of s is greater than one, but it can be analytically continued (a process that I understand in principle but don't know how to put into practice here) to give you results for other values of s. In particular, it is possible to show (see equation 25.6.3) that

where, in this case, → means by a procedure whose description will not fit in the margin of this web page.

That's one way to do it. I'm going to go at it another way. It's akin to the procedure that is described in the first video, but, I hope, more rigourous, though I have probably missed a few steps. It may be equivalent to Ramanujan summation, but don't quote me on that.

Let's start with the series

This is well defined so long as x is between -1 and 1, and we all know that we can also write This equation gives a finite value for all x, except the pole at x = 1, and is equal to (6) for |x| < 1. So we can justifiably say that (7) is the analytic continuation of (6). Also note that if we put x = −1 into (6) and evaluate it by using (7) we get the result where we use the arrow rather than an equals sign to show that these results are obtained only in the limit where x → −1 from above. The result (8) should be familiar from the first video.

Differentiating (7) we get which is defined over the entire complex plane except at x = 1. We can also differentiate (6) and get Again, we can analytically continue (11) into (10) to define the function over the entire complex plane, except for the pole at x = 1. And again, from (10) we have while from (11) we get This, too, was shown in the first video.

Now let's take a look at the difference between S2(x) and S2(−x). Define

For |x| < 1 we could write expand this in a conventional Taylor series, but we can also expand this using (11) to get

where the reason for the factor of 1/3 will become obvious below. Using the series expansions (11) and (15) we can write where It is obvious that for all n, so we can write

so using this prescription

So what's going on here? In the limit x → 1− the nth term in the sum within (17) tends to the value n. The trick is that for any value x < 1 there are only a finite number of cn(x) which are positive, and an infinite number that are negative. Take a look at the graph below, which shows cn(x) for several values of x: 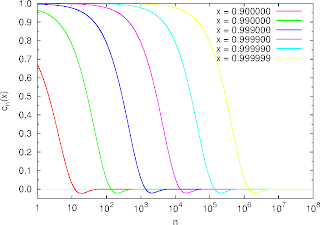 Is this a unique result? That is, do we always get

if we do it "properly"? Beats me. I would think that you could chose different a different set of functions cn(x) which still have the property cn(x) → 1 as x → 1, place them in (17), and get something other than -1/12 as x →1. But I haven't investigated that, and I certainly couldn't prove a general case.